Did you know that Plasti Dip is the oldest peelable, flexible, insulating, non-slip, durable rubber coating company around? It’s true! Robert Haasl founded the small manufacturer of Plastisol products in 1972, and way back then we were making handle grips and toys like Gumby and Pokey. That is until Robert realized how valuable an air dry DIY version of this handy product could be.

More than 40 years (and new colors) later, Dipheads are dippin’ cars, rims, bikes, drones, appliances, crafts, gnomes, helmets, guitars, and anything else they can get their hands on. But Plasti Dip wasn’t always so popular.

CEO and President Scott Haasl watched Plasti Dip grow from struggling family business to one selling a million cans every month. He was 9 years old when his father founded the company and “obviously didn’t understand the business side at such a young age, but being a family business the challenges came home with my father each day,” Scott said.  “You could feel the tension of trying to get a new company off the ground.”

Scott got started early in the business, stuffing mailings on weekends and eventually working in all areas of production, technical support, and sales. “It was easy to sell Plasti Dip because it had so many uses, but it was the concept that was difficult for some to grasp,” he said. “Now with the Internet and YouTube anyone can type in a search engine and in seconds be watching someone doing exactly what you want to do. It’s a totally different world because of that alone.”

Robert didn’t get to see his business boom after Dipheads on YouTube and social media helped show off all the uses of Plasti Dip, but there were tons of practical projects that we were involved in over the years and all over the country. We coated bridges throughout Minnesota, extended the life of weather-beaten barriers on the Pennsylvania and New Jersey Turnpikes, and did test evaluations on the Golden Gate Bridge. We’ve even been to space! Or at least the coating we created for the International Space Station SPHERES project has been to space. Still pretty cool.

What’s the coolest thing you’ve dipped? Keep sending us your projects, ‘cause we’re not going anywhere. 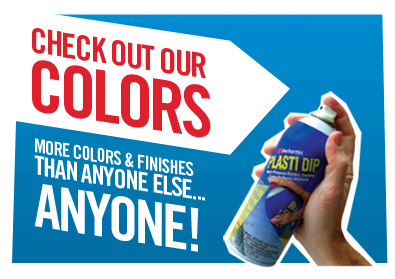